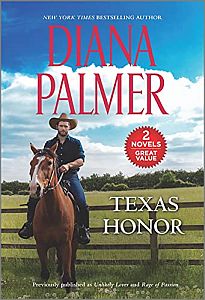 When Ward Jessup and Mari Raymond meet after being brought together by Mari’s wily matchmaking aunt, neither is what the other expected. The handsome oilman is anything but old and unwell, and Mari is hardly a helpless girl. But although the sparks fly between them, they can’t fight the power of Cupid’s arrow…

Rage of Passion (Friends and Lovers Book 2)
(originally published January 1987 in Silhouette Desire #325 in mass market paperback and reissued numerous times, including May 2014 in eBook)

A vacation at her grandmother’s ranch would have been the perfect place for Maggie Turner to escape her ex-husband’s threats. Perfect, that is, if it hadn’t been for Gabe Coleman. The sexy rancher was just as direct—and undeniably handsome—as he’d been ten years ago. And his icy-blue eyes dared her to look beneath his rough exterior. Could this rugged Texas cowboy give Maggie a new lease on love?