The Men of Medicine Ridge 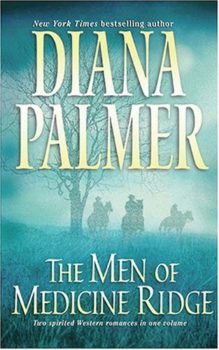 For rugged ranchers Mack Killain and Gil Callister, setting pulses aflutter is all in a day’s work. But these towering, tenacious men of Medicine Ridge Ranch won’t be sweet-talked into marriage. Or will they…? Sparks fly when two beguilingly innocent bachelorettes pull out all the stops to charm their surly cowboys into trading in a life of stubborn solitude for love on the range!

The Wedding in White
From the moment Mack Killain branded her with his slow, sensual kisses, schoolteacher Natalie Brock knew the dynamic cattleman was her destiny. Now she just had to convince him of that!
Originally released exclusively as a Silhouette Desire thru Harlequin Direct in 2000.

Circle of Gold
Never in her wildest dreams had Kasie Mayfield believed that her formidable boss could sweep her off her feet. Why then was it on the tip of her tongue to passionately profess her love to the ornery Gil Callister?

Originally released exclusively as a Silhouette Romance thru Harlequin Direct in 2000 and reissued September 24, 2004 in mass market paperback by HQN.