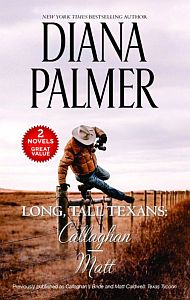 Rugged as an oak, moody as a thundercloud, rancher Callaghan Hart awed women and intimidated men. So how could one scrappy little redhead nearly bring Callaghan to his knees?

Easy! Tess Brady, the ranch’s new housekeeper, was soft and sweet. Her youthful innocence drew him like a moth to a flame. But there was no way Callaghan would ever consider marriage, and a casual fling was out of the question. Somehow, he had to resist her, no matter how tempting she was….

Matt Caldwell must be the hardest-hearted man in the Lone Star State. The last thing he wants to do is open up to a woman—let alone trust her! —and risk getting hurt. So he’s sworn off spending any time with a member of the fairer sex…until his beautiful new assistant walks through the office door. What’s a mogul to do?

On the run from her past, Leslie Murray is in need of a protector, stat. And her new boss might just be the one who can guard her present—and protect her future. But when Leslie suddenly finds herself in Matt’s strong arms, she wonders if she could be the one to knock down the bachelor’s protective walls and finally bring love to this long, tall Texan.