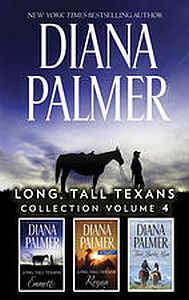 Single dad Emmett Deverell knew that moving to Jacobsville, Texas would give him lots of quality time to spend with his young children. But he soon realizes that he’s no match for his three wild ones on his own; they could use a tender touch. Emmett needs help—stat—and the only person he can turn to is Melody Cartman. Sparks fly, but can secrets and trust issues get in the way of this ready-made family from finding a happily-ever-after?

Years ago, Coreen Tarleton fell head over cowboy boots for sexy millionaire cowboy Ted Regan. But his rough rejection sent her running into the arms of another man, a decision Ted could never forgive.

But now Ted has a second chance with widow Coreen. She has grown into a beautiful woman, far from the naïve girl she was long ago, but her heart still belongs to her rogue rancher. What’s standing in their way? Regan’s pride…

Todd Burke has no intention of marrying anyone, even if that means completing the family his daughter has always wanted. For Todd, one feisty female under his roof is just plenty. But his little girl absolutely adores pretty Jane Parker. And all the single father can do is keep on telling himself that he doesn’t want Jane in his life for good.

FREE BONUS STORY INCLUDED IN THIS VOLUME: Second Chance Cowboy by B. J. Daniels (originally published May 2008 in Harlequin Intrigue #1059)