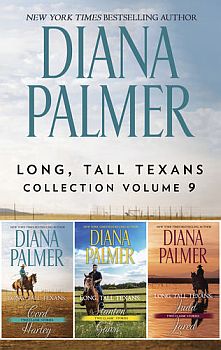 After barely surviving an attempt on his life, ruthless mercenary Cord Romero resolves to neutralize his foe. In order to get closer to his target, Cord joins forces with childhood friend Maggie Barton. But passion must take a backseat to protection, as a tragic secret from her past sets her up as a pawn for his lethal enemy.

Cool, composed rancher Harley Fowler finds his world turned upside down when a beautiful whirlwind bumps into him. Investigator Alice Jones has come to Jacobsville, Texas, to solve a deadly mystery, and Harley finds himself square in the middle of her case. But which will win out—true love or a dangerous threat?

Steely mercenary Stanton Rourke lives life on the edge. As his childhood friend Clarisse Carrington struggles to keep her distance, sparks as hot as a Texas summer fly between them. But when her life is threatened, Clarisse must turn to Rourke, the one man who’s most dangerous to her heart.

In order to mend broken family ties, FBI agent Garon Grier decides to settle on a ranch in Jacobsville. But this Texas town isn’t all peace and quiet, as Grace Carver knows all too well. These unlikely allies are brought together when the desperate lawman must track an escaped predator—and Garon and Grace have one chance to put the past to rest….

Several years ago, Texas Ranger Judd Dunn upended Christabel Gaines’s life by jailing her criminal father—and marrying her! Now, just when Judd is about to set Chrissy free, a bloodthirsty foe targets his innocent wife. And Chrissy has grown into a smart, fearless woman with unfulfilled desires. She will do anything in the name of love, including putting her life in mortal danger for her husband.

Rancher Jared Cameron is a mystery to everyone in Jacobsville…and he likes it that way. Only sweet Sara Dobbs dares to intrude on the loner, who’s charmed by her audaciousness. But their burgeoning relationship soon thrusts Sara into Jared’s hidden world of intrigue, and the iron cowboy must steel himself to fight for both of their lives.