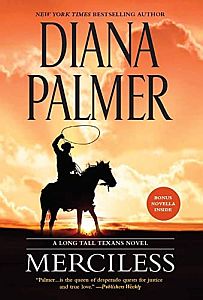 FBI agent Jon Blackhawk has no interest in settling down with a wife and family, despite being one of Jacobsville’s most eligible bachelors. If he had his way, he’d be happily single forever. Luckily, Jon has a gatekeeper: his efficient and reliable assistant, Joceline Perry. Without her help, he’d be at the mercy of the women of Jacobsville. But the more he comes to rely on her, the more he notices how invaluable—and attractive—she really is.

While Joceline can’t deny that her boss is the epitome of tall, dark and handsome, as a single mother with responsibilities, she doesn’t have the luxury of being anything but professional. But when Jon is accosted by a criminal seeking revenge, she comes to his aid—fueling the spark that is growing between them.

As the danger to Jon’s safety grows, Joceline stands by his side. But when the smoke clears, will the man who avoided love realize that all he ever needed was right there all along?

“You just can’t do better than a Diana Palmer story to make your heart lighter and smile brighter.” —Fresh Fiction on Wyoming Rugged

Originally published July 2011 in hardcover and April 2012 in eBook.