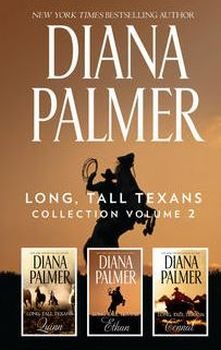 Snowbound at Quinn Sutton’s ranch, Amanda Callaway is hiding out to heal her heart, not to fall in love. After all, her rugged mountain man host is busy raising a child; he has no use for love, let alone with a city girl. But Quinn never counts on how special Amanda would become to him. Battling his misconceptions, she vows to prove to Quinn she’s the woman for him…but once he discovers the truth, will she lose him forever?

Arabella Craig was eighteen when Ethan Hardeman first opened her eyes to passion…and then turned around and married another woman. Four years later, tragedy brings Ethan, still just as tall and handsome, but newly divorced and bitter, back into her life. He runs his family’s cattle empire with an iron hand, yet he refuses to loosen his grip on the reins holding back his heart. Arabella is determined not to let this Long, Tall Texan escape her again!

For years, Penelope Mathews worshipped the elusive C. C. Tremayne from afar. Until one night, when, trying to protect the mysterious loner from getting into trouble, Pepi seeks refuge in a wedding chapel—and winds up emerging as Mrs. Connal Cade Tremayne! When C.C. discovers what happened, he’s outraged and plans to end their “arrangement” immediately. Yet the more time he spends with Pepi, the more he realizes he doesn’t want their marriage to end…